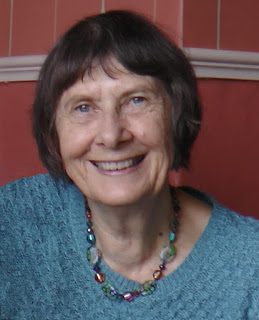 Just joined STEEM which is an exciting new way to make contact with the world at large. Watch this space!
Posted by Viv Doyle at 10:54 No comments:

We interrupt this gameplay to bring you breaking news . . .
Review of The Treason Game by Starving Author, J B Garner, can be found here:
https://jbgarner58.wordpress.com/category/starving-review/
You can also read my interview on the same site at:
https://jbgarner58.wordpress.com/2017/01/27/starving-interview-viv-doyle-author-of-the-treason-game/
Mr Garner is an author of fine fantasy fiction himself, so I am honoured to have him give his opinion of my novel.
Posted by Viv Doyle at 15:28 No comments:

My next favourite game was THEME PARK, an early ‘God Game’ published by Bullfrog/Electronic Arts in 1994. 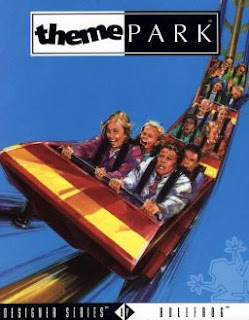 This had all the elements for me: cute rides and characters, management strategy, catchy tunes. The design was pretty rubbishy, of course, but the gameplay had me hooked until . . Along came THEME HOSPITAL! 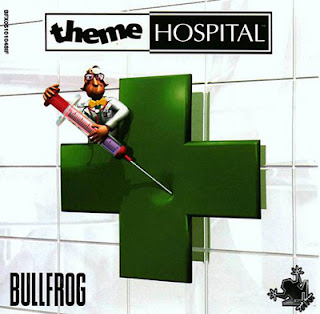 Another triumph for Bullfrog/Electronic Arts, in 1997. Even better, this game has hilarious diseases and hideously deformed characters, so what’s not to like? Sound effects had moved on by now to include announcements of all kinds and a fiendishly new level of gameplay difficulty. I did once get to the end, but only after an appalling toll of epidemics and hospital closures.

I never got into games consoles like Playstation, Nintendo, Atari and Sega so my game-playing was limited to PC games. Angry Birds (2009) – totally addictive, and a bit of Minecraft (2010) although I see that as more of a boy’s game as it’s bit too abstract for me. I guess up to that point I had no idea about MMORPGs even though you could play them in the 1990s on Compuserve, for instance. I was on Compuserve as a moderator of writing topics but didn't explore it enough to discover that I could play online with other people. That thrilling revelation happened quite a long time later.
Posted by Viv Doyle at 09:21 No comments:

I can remember when everything changed.
My computer game Eureka! Moment came in the form of an irritating little character called SIMON, an apprentice SORCERER. Suddenly a computer game had a STORY, with CHARACTERS and BACKGROUND SCENERY. This happened around 1993. Now gaming came with pretty pictures and sarcastic humour, even a jolly theme tune - although there was no sound in the actual game, only speech bubbles and script. To make Simon do anything at all you had to click on a written instruction. Still, it seemed like a huge leap forward and a whole lot more fun.

It was still a single-player game, although if you had another player in your house you could compare your experience, share tips, etc. 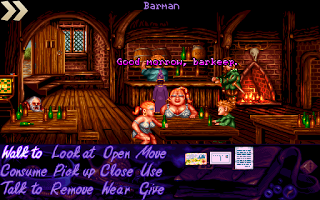 Manic Miner, On the Spectrum -affectionately known as 'speccy' -  this was the first game with in-game music, the playing of which required constant CPU attention and was thought impossible. It was achieved by constantly alternating CPU time between the music and the game. This results in the music's stuttery rhythm. The in-game music is In the Hall of the Mountain King from Edvard Grieg's music to Henrik Ibsen's play Peer Gynt. The music that plays during the title screen is an arrangement of The Blue Danube. In each of the twenty caverns, each one screen in size, are several flashing objects, which the player must collect before Willy's oxygen supply runs out. Once the player has collected the objects in one cavern, they must then go to the now-flashing portal, which will take them to the next cavern. The player must avoid enemies, listed in the cassette inlay as "...Poisonous Pansies, Spiders, Slime, and worst of all, Manic Mining Robots...", which move along predefined paths at constant speeds. Willy can also be killed by falling too far, so players must time the precision of jumps and other movements to prevent such falls or collisions with the enemies. 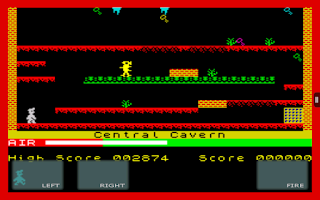 Before long we had swapped our rudimentary Superboard for the superior Sinclair ZX Spectrum. This opened up a huge range of potential games, such as Chuckie Egg,
Hen-House Harry is our diminutive hero and his task is to run through each of the eight barns snaffling a dozen eggs from each. Along the way he must avoid deadly chickens that would be only too happy to peck his pixel eye out. This isn't surprising really when you consider that Harry can also deprive the poor creatures of their seed to gain time and points bonuses. He may be a wimp when it comes to cock fighting (yes, I know that technically these are Hens) but Triple-H does possess the bionic ability to withstand huge falls, which certainly helps as you rush between the ladders, lifts and platforms.
Posted by Viv Doyle at 04:02 No comments:

Viv Doyle
I have written for most of my life, and the question people always ask me is 'Where do you get your ideas from?' THE TREASON GAME came to me after playing an online game, and it just cried out to be written, so here it is! I had such fun researching how games are made, and going to PlayExpo at EventCity in Manchester. Often the advice given to writers is 'Write about what you know' but for me the thrill of finding out about new things makes writing a more exciting adventure. My writing career has been long and varied. As well as having over 25 novels published under various pseudonyms by Hodder Headline, Little Brown, Virgin etc. I have self-published as eBooks many more novels, novellas and short stories as well as some children's stories.